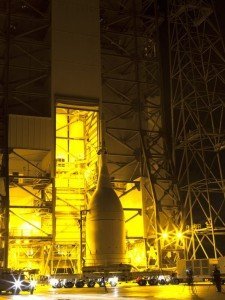 The two-orbit flight will send Orion 3,600 miles into space to test various systems, notably the heat shield during a nearly 20,000-mph reentry through the atmosphere prior to a splashdown in the Pacific Ocean.

The mission is one of two test flights without a crew before astronauts are a boarded by NASA’s Space Launch System exploration rocket, possibly by 2021.

By the mid-20s, NASA hopes Orion will take a crew to a small asteroid that has been mechanically pulled to an orbit near the moon. The agency says a human mission to Mars is possible in the 2030s.